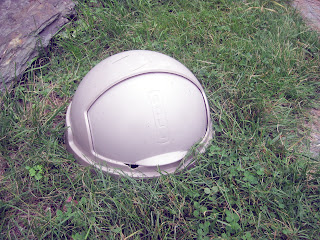 I've gotten a lot of responses to my Doggie Dumpster post. It has been about year and some of findings and expectations are surprises. Here is a summary of my communication and what I've learned:
1. I thought the doggie dumpster would fill up really quickly. It didn't and I haven't had to move it. I attribute this to at least 2 factors. First, my town put a garbage can at the end of the trail (more people are cleaning up after their pets and using the trash can)-- so I am putting in less waste than I expected. I have an addition once a week or less frequently in Spring and Summer and maybe once every few weeks in the winter (we had a lot of snow cover this year so dogs were walked in the street). Also, while the dumpster filled over the winter, it shrank (and continues to shrink) again when the weather warmed up. I put another half pound of worms in the doggie dumpster in early May. I think the material is draining away into my subsoil. I am on sandy soil, so this is my best guess. If I were on clay, I suspect I would have had to move the doggie dumpster by now. 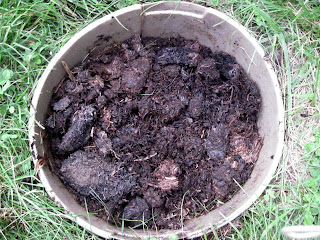 2. You could use the doggie dumpster for cat waste, but I can think  of at least 2 cautions. Cat waste can harbor pathogens that are hazardous to pregnant women. Also, the clay that is commonly used for cat litter can quickly dry out a worm bin. I learned there are other materials, such as corn cob litter. These may be better alternatives if you plan to compost cat waste.
3. I've had some lively discussions about harvesting compost from the dumpster for use in planting beds, and I agree that you could do it if you were really careful. However, I maintain my general recommendation that the material in the dumpster should remain in the dumpster and that the dumpster be moved when (if?) it fills up. I just don't think it is worth the risk-- better to put your doggie dumpster in your perennial bed or orchard.
4. Other critters. All kinds of insects and bugs are commonly in my doggie dumpster. Last summer a large spider spun a web across the inside of the dumpster lid. I commonly see sow bugs in there also.  I also have some evidence of a larger animal (?) chewing on my cover. I don't know what it was (mouse, chipmunk, squirrel) but some animal chewed on the lid in January. I saw no evidence that they dug in the pile, but who knows. I keep the lid closed and I have not found it open. 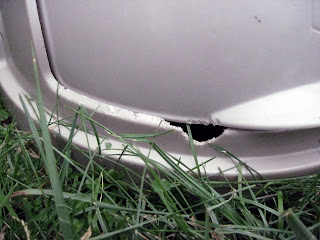 5. I've been putting sawdust (winter) and compost  from my outdoor pile (the rest of the year) in to cover the additions of dog waste. My outdoor pile froze and I elected to put sawdust in to cover the winter additions when I could not access my compost. This seemed to be OK, but I didn't make a lot of additions this winter. Sawdust has a high carbon to nitrogen ratio. To have efficient composting you would have to balance that with a nitrogen-rich material (like grass clippings).

Posted by WormMainea at 10:51 No comments: