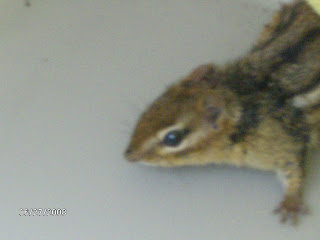 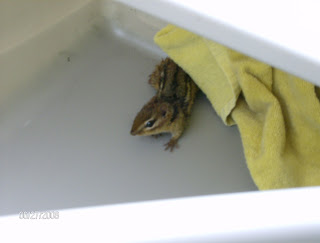 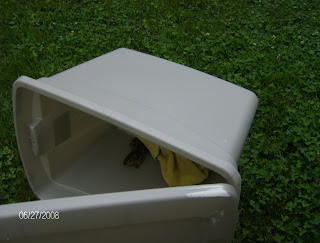 We netted the blueberry bushes this year as usual, but we had an unusual occurrence. We caught a chipmunk! We net the blueberry bushes every year to improve the number of berries we get. Yes, we leave a few for the birds!
A few weeks ago, I was out walking the yard and garden around 6:30AM. I heard a rustling and discovered a chipmunk badly tangled in the netting. I ran to get my scissors and heavy gloves. I could not cut him out without risking escape while leaving some tangled around his neck (not a good thing!).
So I got a storage bin (intended to become a worm bin) and placed the chipmunk and netting into the bin. Then we all drove to the 24 hour animal clinic in Westbrook. They were willing to remove the netting from the chipmunk for free. Partway through the procedure the desk person came out to tell us that it was going well, but the vet was taking the chipmunk's blood pressure!
They gave him back to us in our storage bin.
Either this same chipmunk was caught twice or two weeks later we caught different chipmunk! This time, we got to him/her before he/she was too badly tangled.
For those of you who are skeptics about neck snares (and I am a recent convert!), I can assure you they work.
I am not sure about whether I'll put bird netting on the blueberry bushes next year. If I do, let's hope the chipmunks are smarter!
Cheers,
Mark
Posted by WormMainea at 07:52